Another non-photography related post. I'd post this on my personal/theological blog, but with photos, it's easier over here.

I decided to get an ESV Personal Reference Bible rebound by AA Leather Bindery. It's goatskin & lined in goatskin. Overall, I'm really pleased, and I will almost for sure being going back to Andrew again. I eventually hope to get a pocket New Testament sometime in the future.His work is very good, the price is very good, and his turn around time is great.

I'm happy with the bible, there are a few negatives, but none of them are big deals. Sometimes email communication was a little slow. I had asked for "goatskin" or something similar on the inside cover, but that wasn't included. On the order form sent with the Bible, I was undecided on the ribbon colors, and then passed on my decision via email, but the ribbons on the rebind were different. The other negative (which is a little biggerdeal, though not a deal-breaker) is in relation to the leather liner. In email correspondence, I had asked about using a different leather for the liner. I had suggested lambskin, but Andrew suggested calfskin — so the plan was to have a goatskin cover, and a calfskin liner. But his apprentice made the cover, and used goatskin and goatskin by mistake. Andrew was very gracious, offered to remake it, or to go with it as-is at a slightly discounted price and free shipping, so I decided to go with it with the goatskin liner. The goatskin liner is really great — but for reasons I'll show below, it may not be right for me. If i could do it again, I'd almost for sure go with the calfskin liner.

Hopefully these photos give you an idea of what AA offers. It's really good stuff. I'm really happy with it.

So for some photos — these are after a week or so of very heavy use. 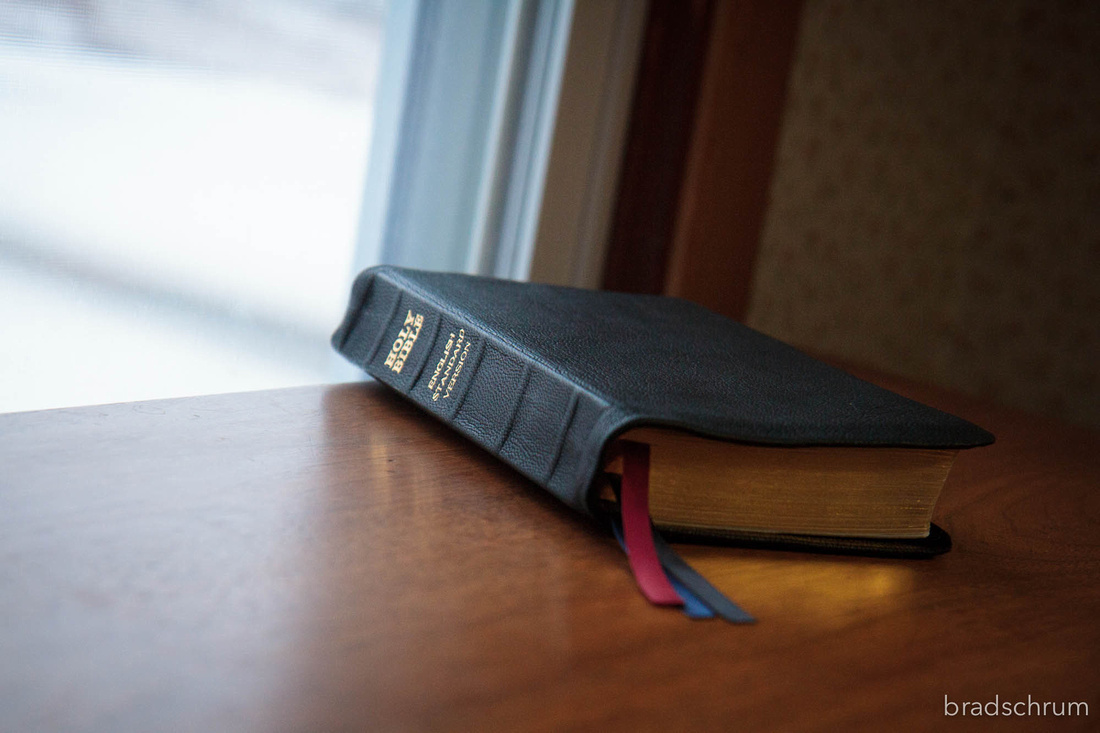 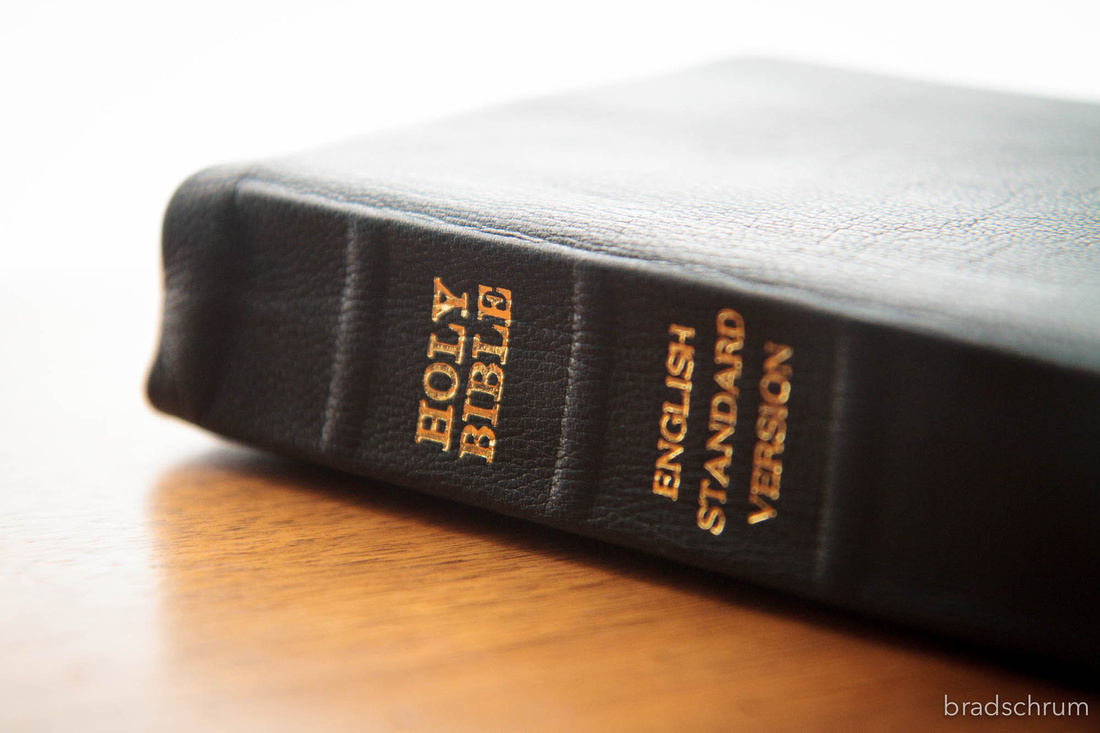 Besides the price and the turn around time, the quality of his imprinting was one of the reasons I went with AA over Leonards. It's really good. 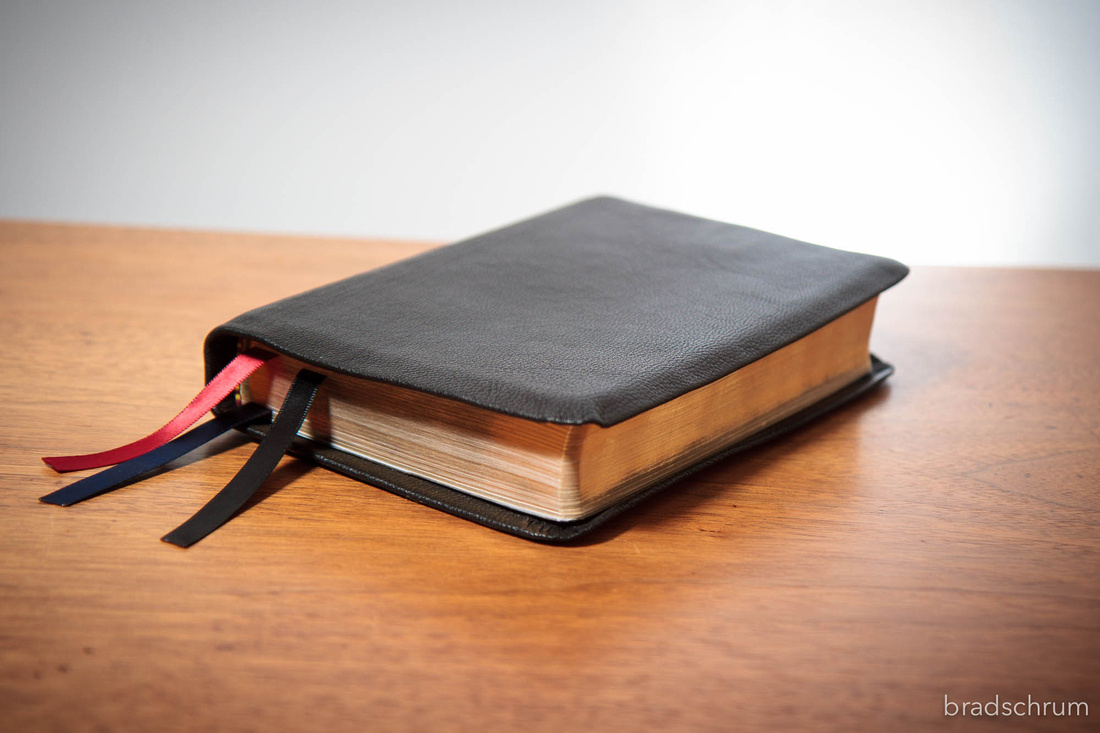 I asked for semi-yapp edges, that he conformed around the text block. It turned out really well. 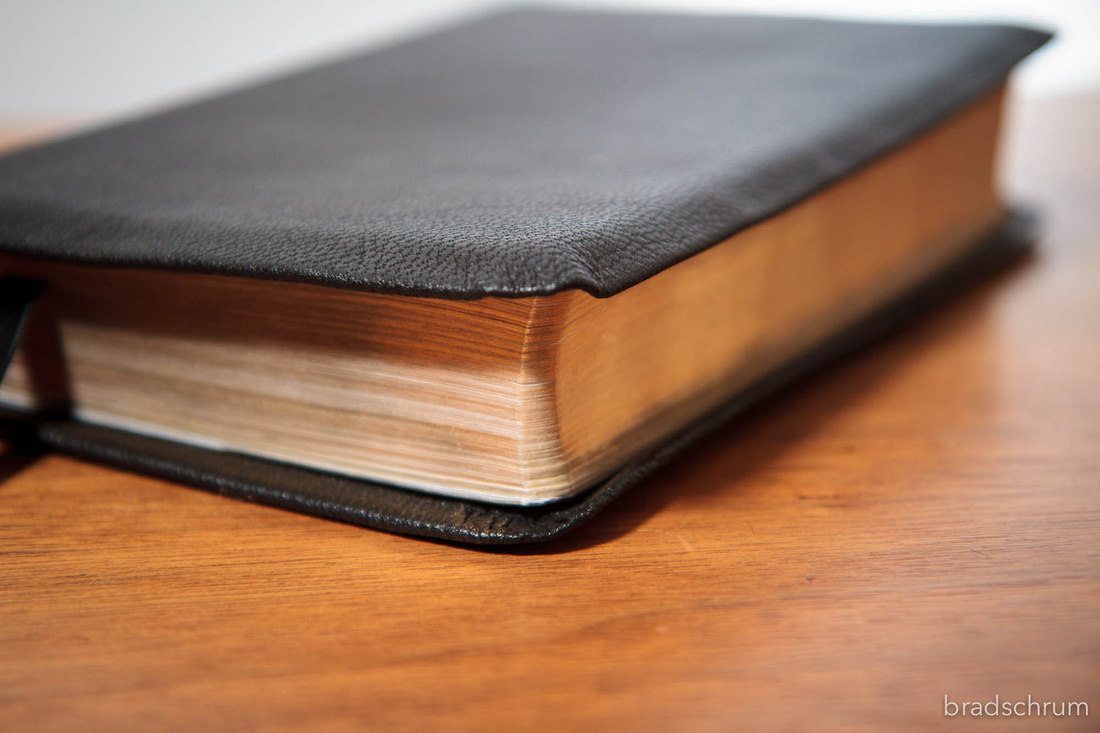 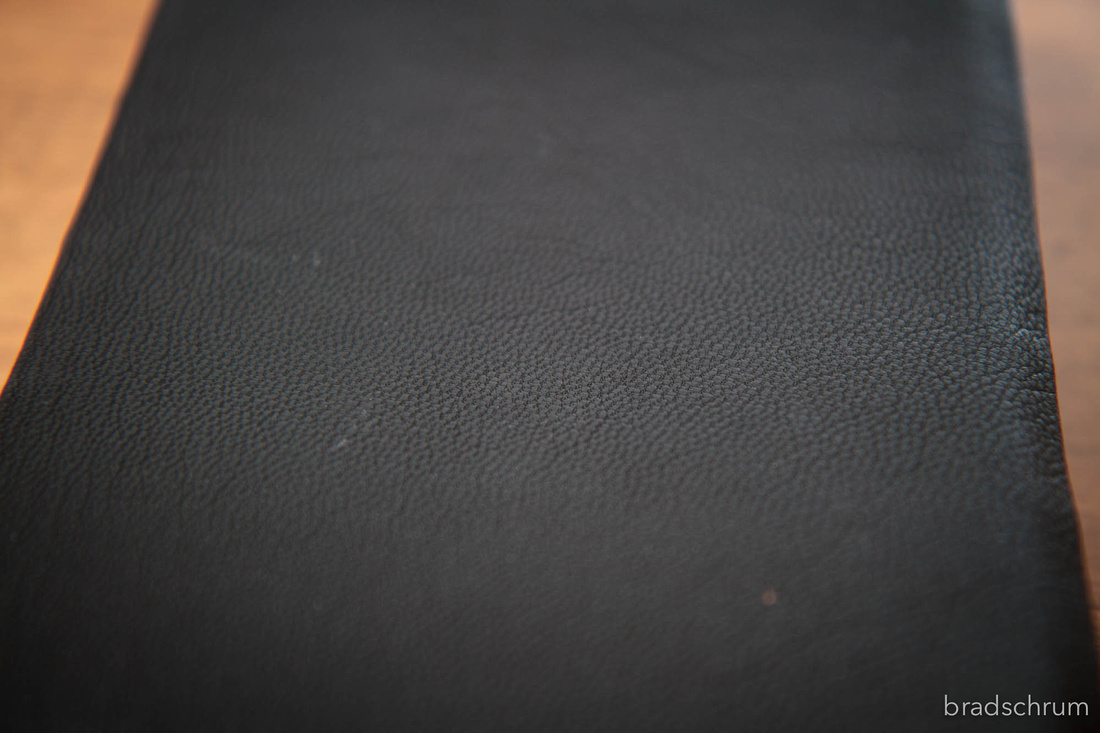 The grain for the goatskin is really nice. It's very similar to Leonard's soft-tanned goatskin. It's the softest leather I've ever seen on a bible. 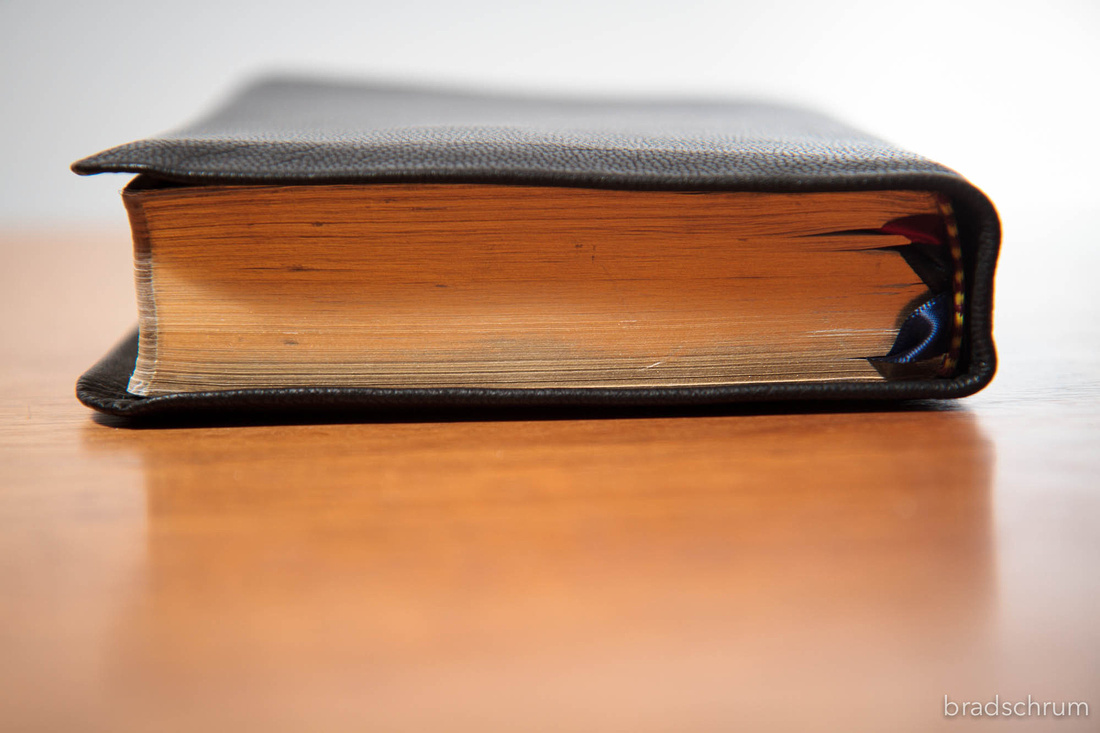 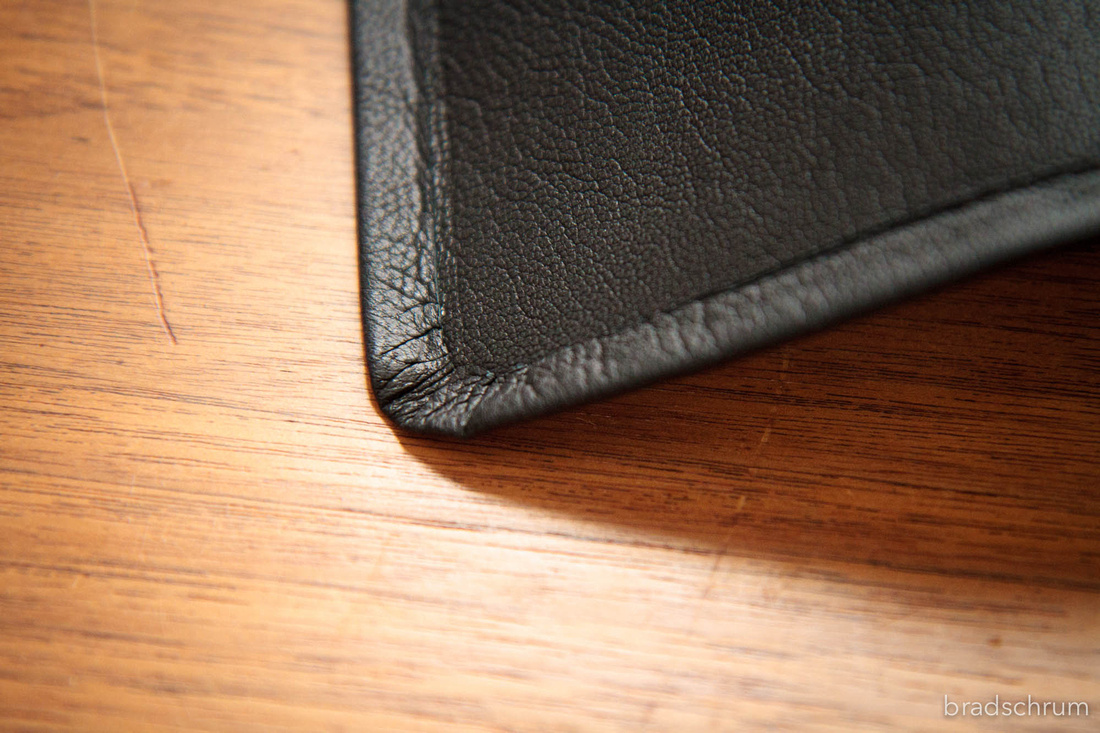 The corners are not as "finished" as a publisher or Leonard's, but it's still very good. Here you can see the seam where the liner and the cover meet. 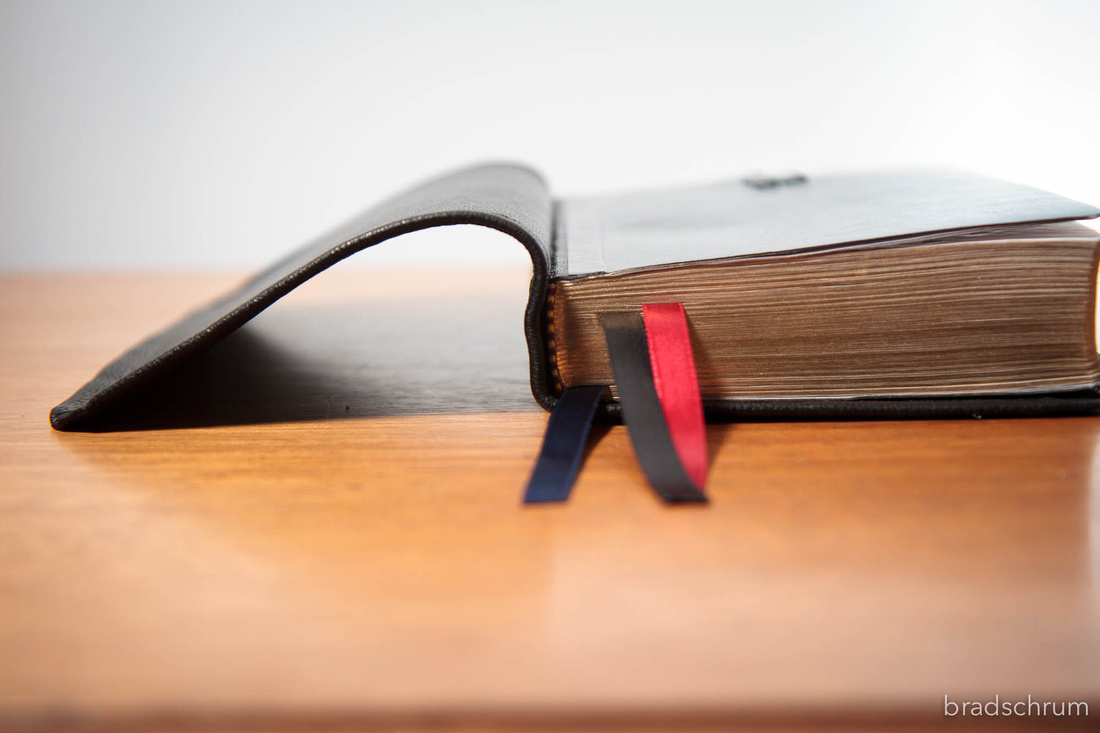 This is also the limpest cover I've ever seen. Compared to Abba Bibles, Allan's Bibles, and other similar bibles, this is the limpest, softest, most pliable cover. 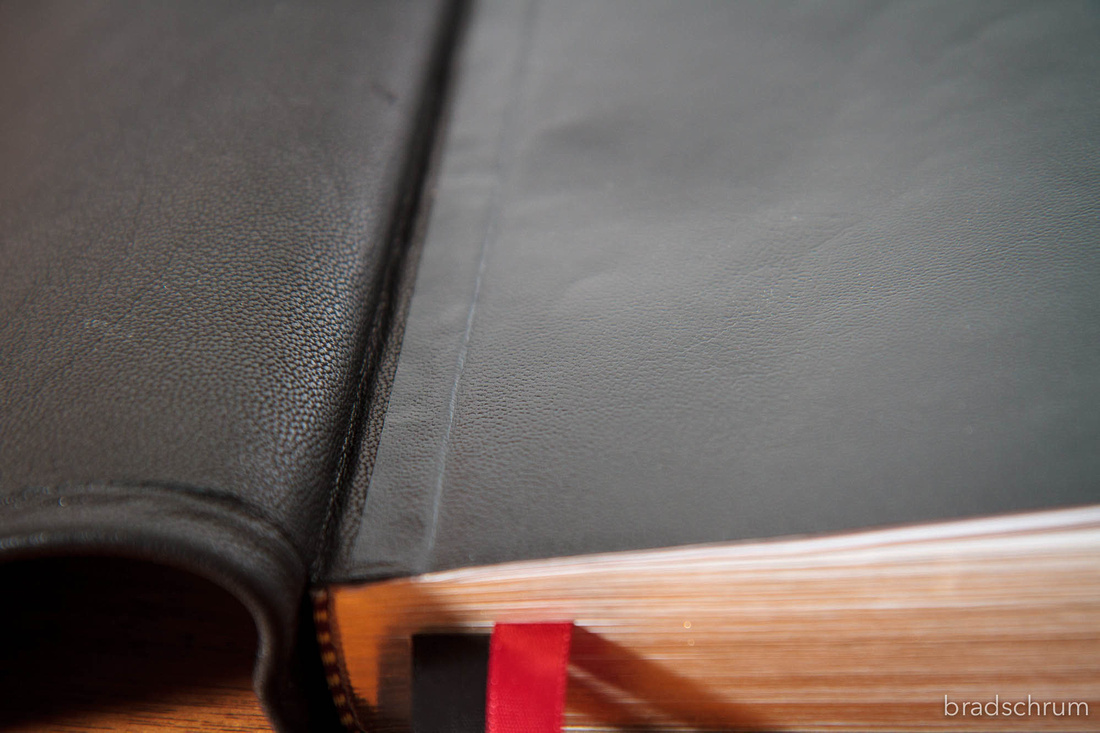 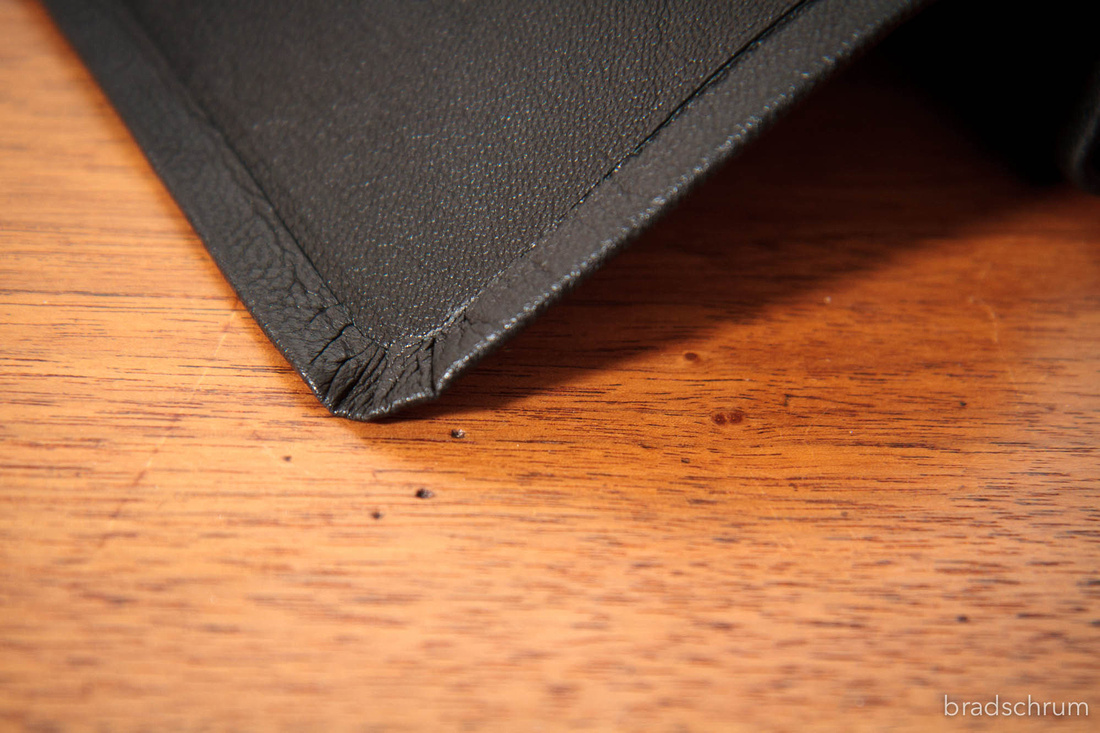 Another shot of the corner. This shows the grain well, but the lighting in this photo makes the leather appear glossier than it really is. 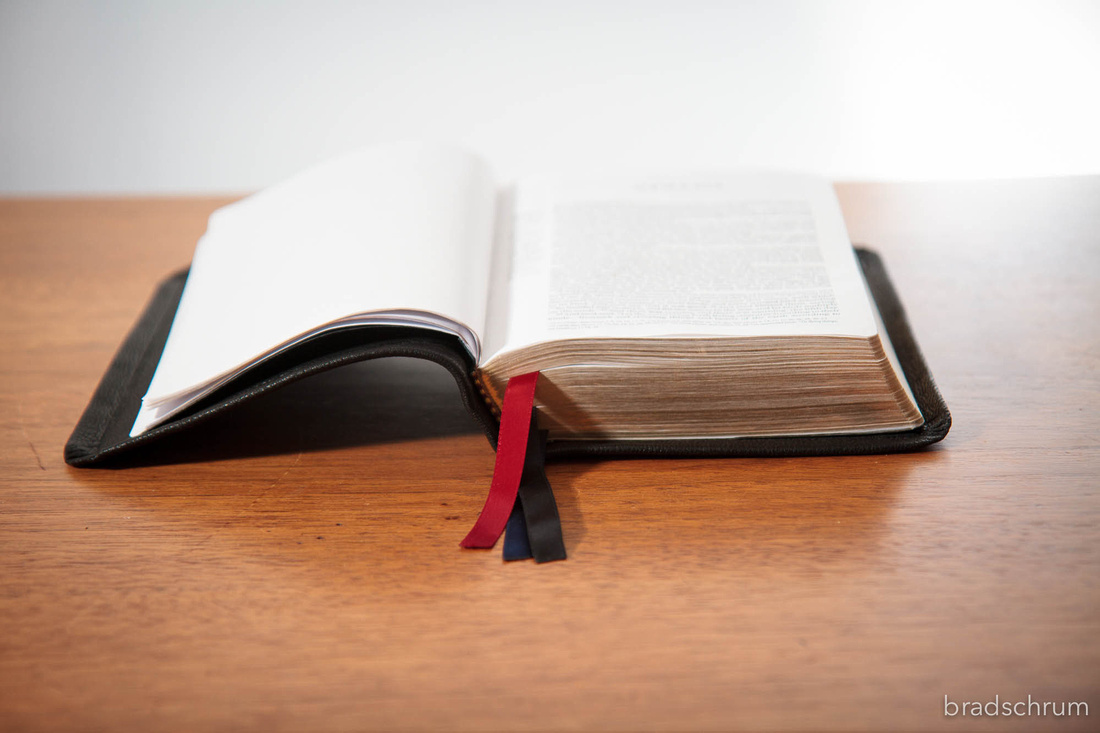 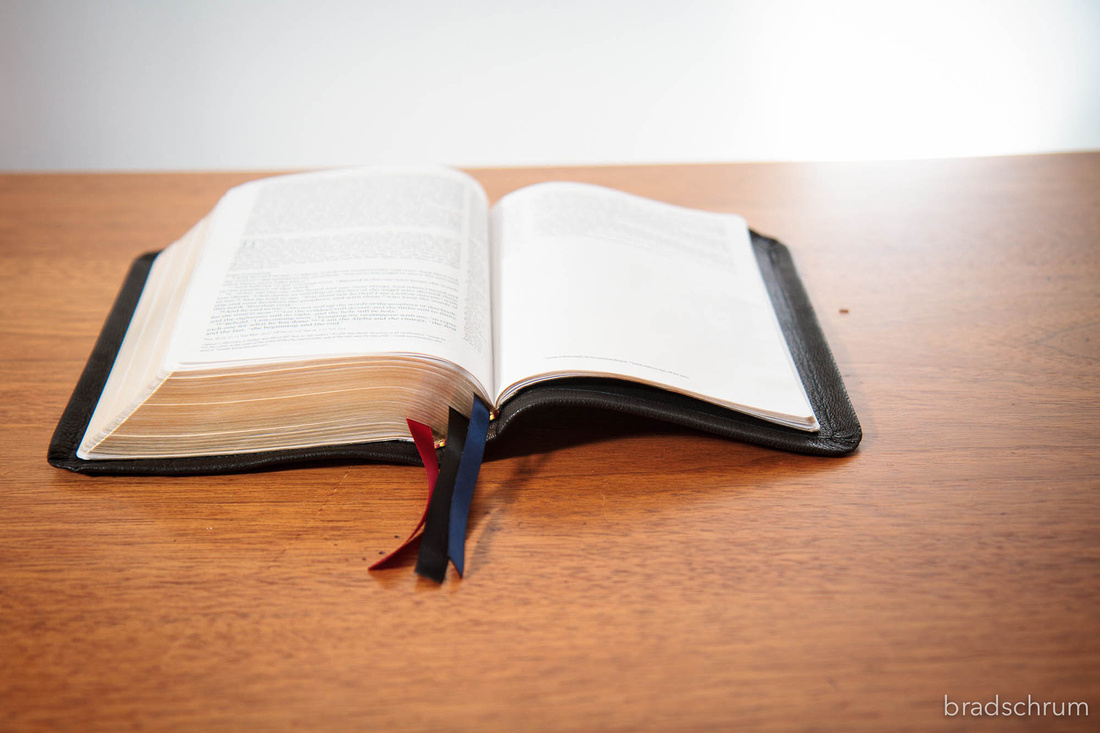 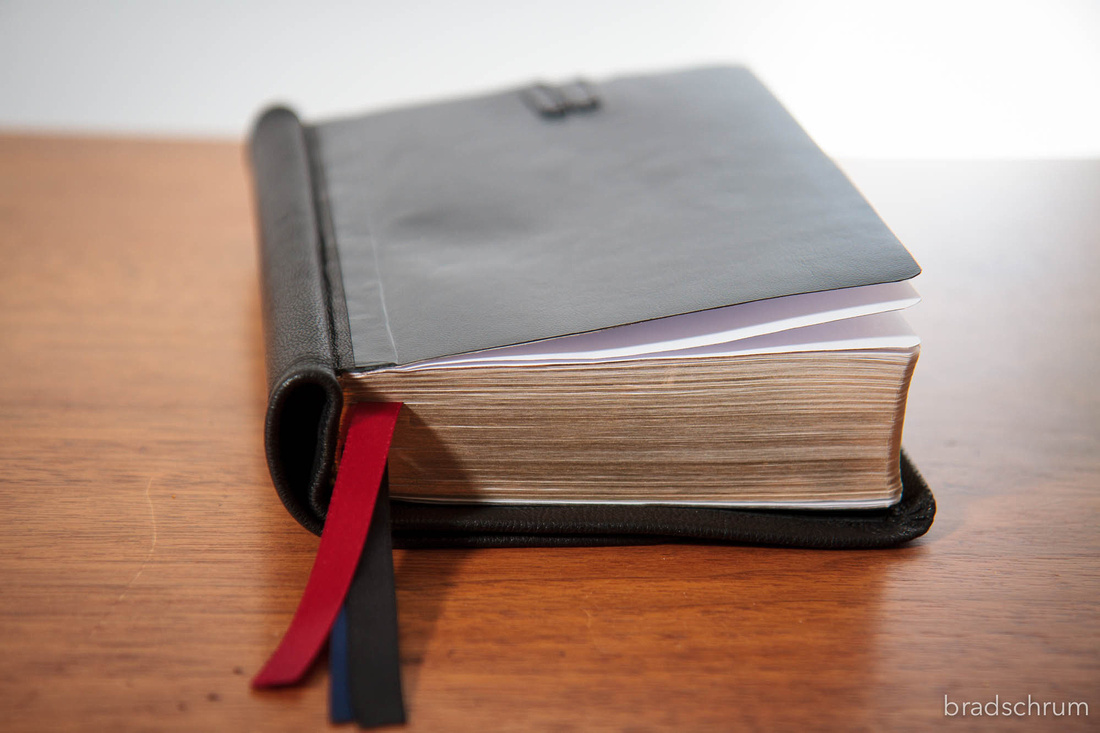 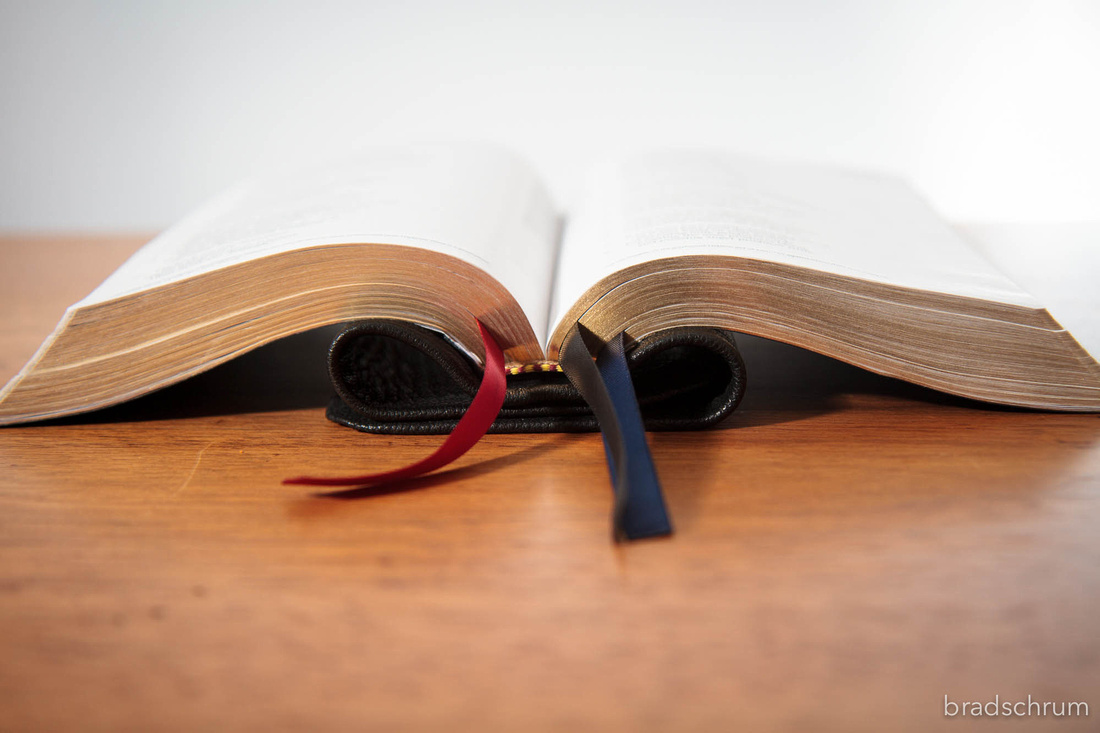 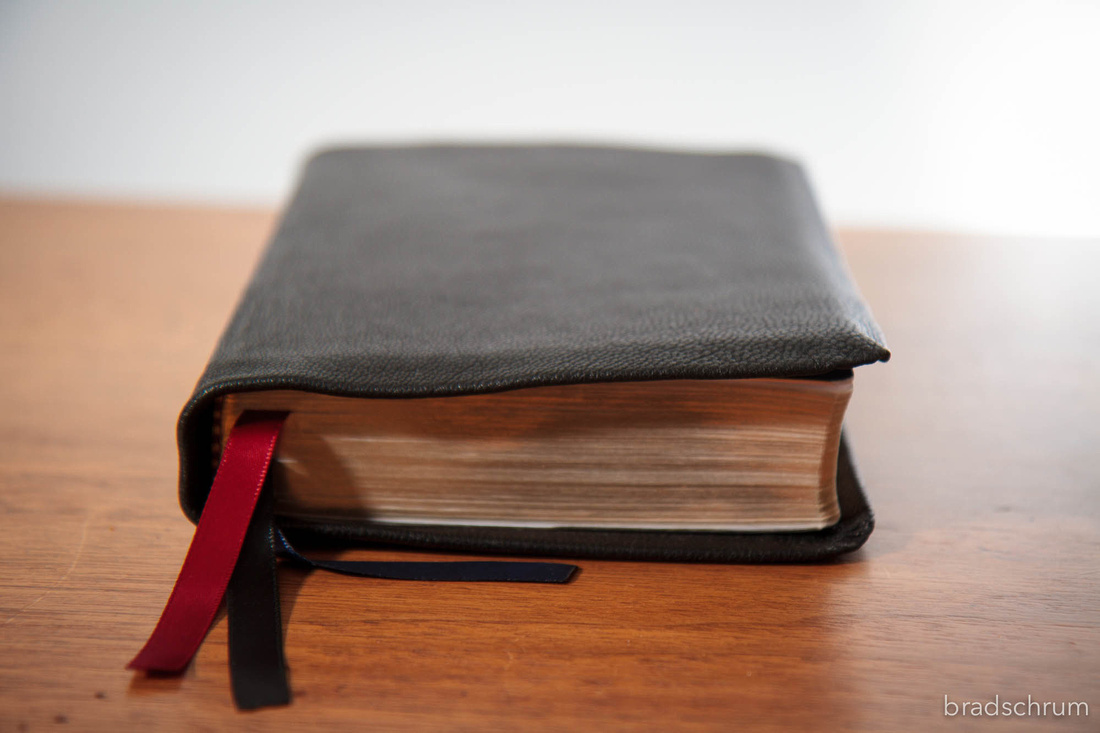 It springs right back after yoga. It's incredibly flexible. The photo is seconds after yoga.

Below are some photos of it compared to an Allan's ESV Personal Size Study Bible (which is also a brand new bible). 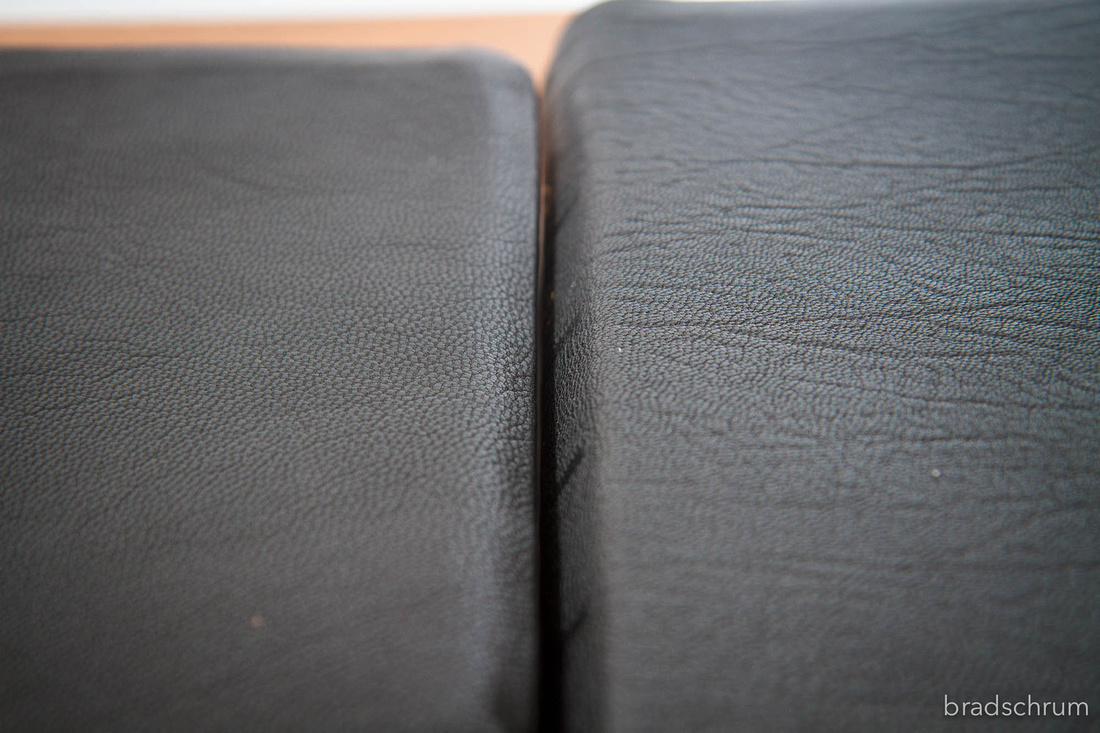 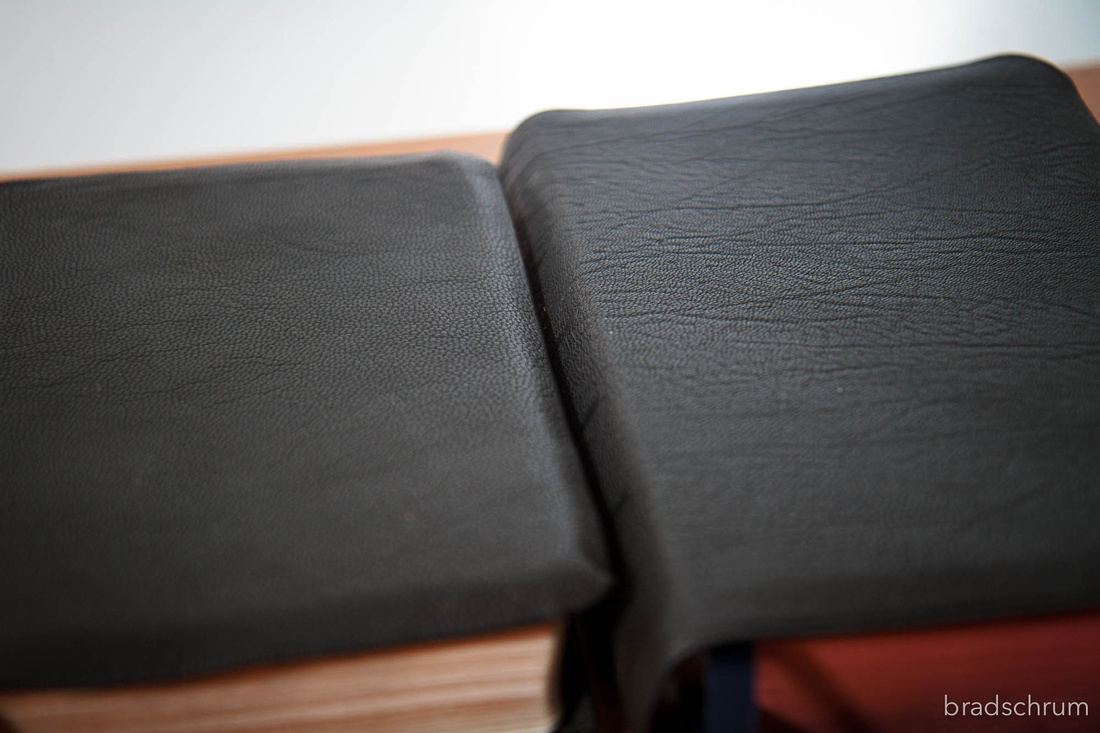 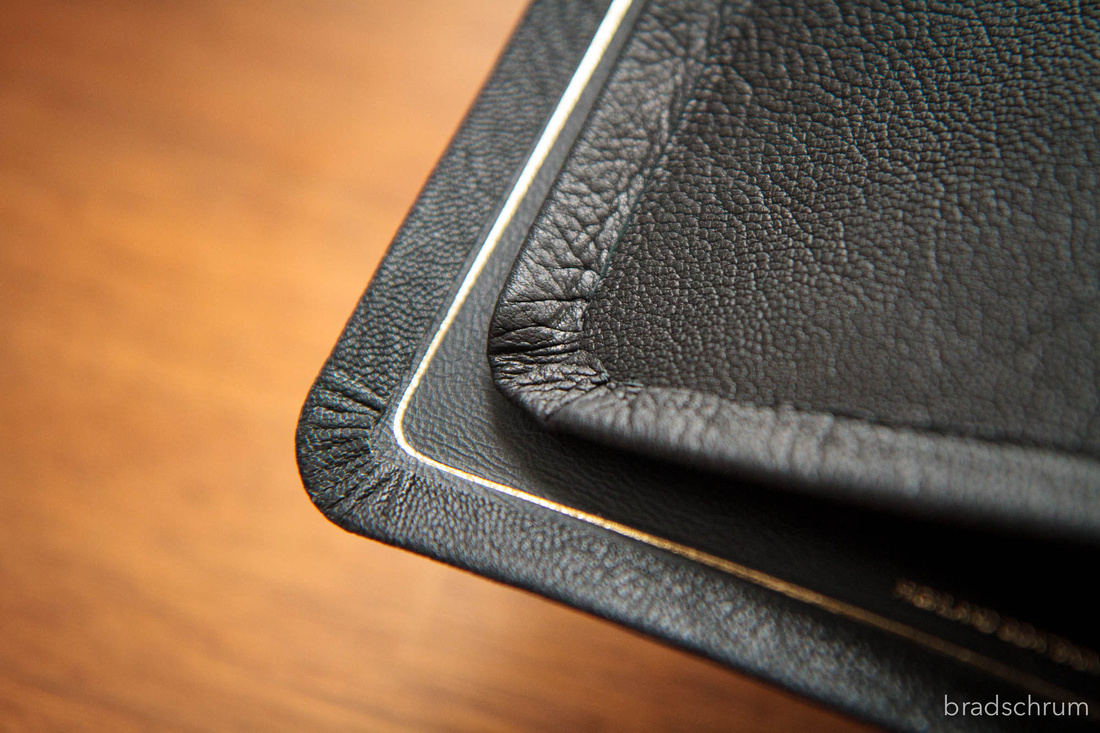 The AA bible cover is significantly softer and more flexible than the Allan's. It's thicker too. Personally though, I prefer the Allan's. It's grain is more pronounced, and I actually prefer that the leather is stiffer. The AA has no need for really any breaking in—it's already crazy soft. Allan's is going to be coming out with the PRB in the next year to year and a half—for financial reasons, I doubt I'll buy one, but if it was out now, I'd do it. But I need a bible to read, teach and preach from now, and this AA bible will fit the bill nicely. 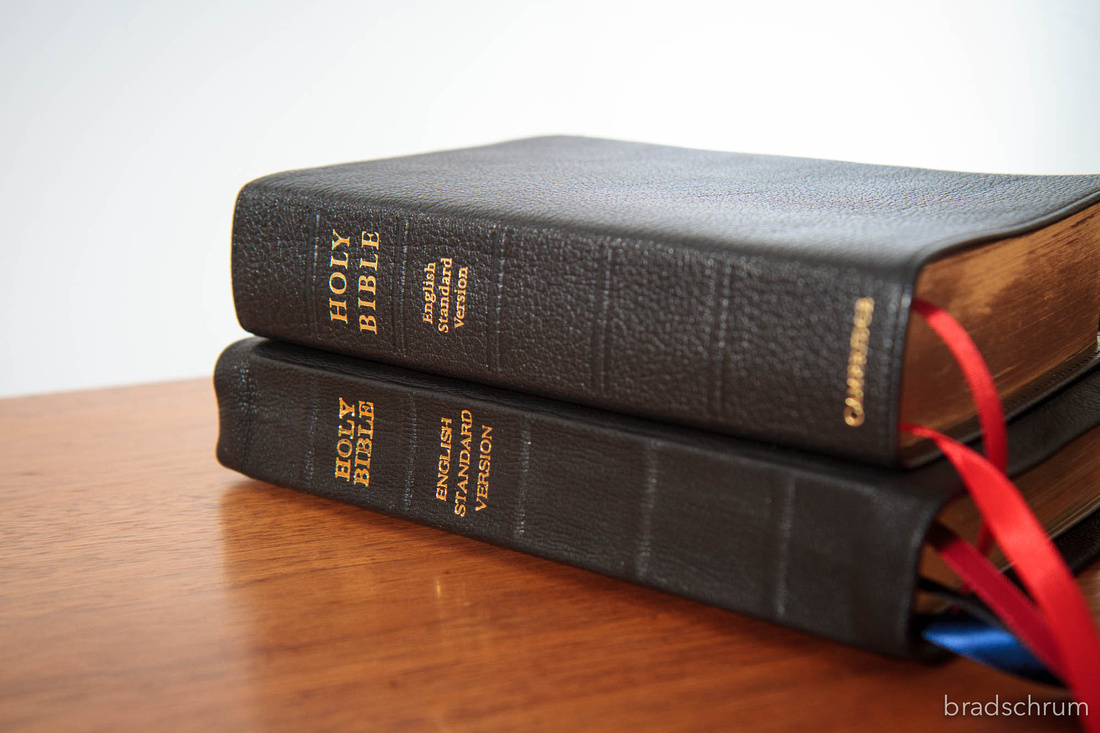 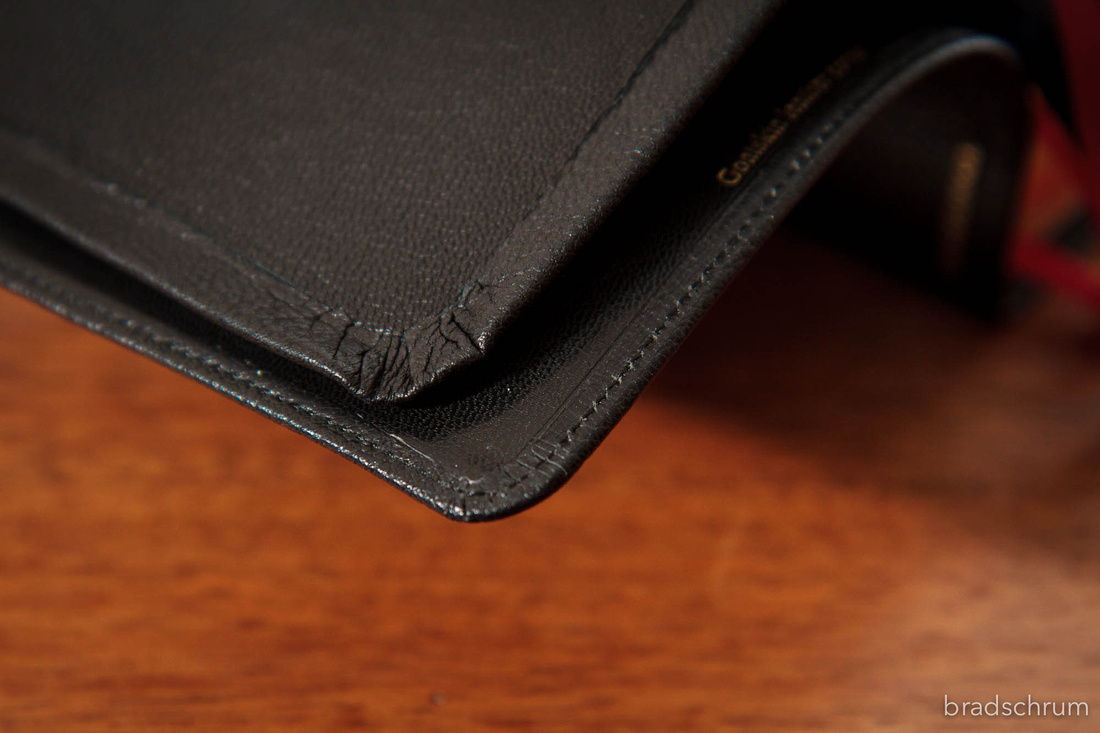 Compared to a Goatskin ESV Clarion.  You can see my post here where I compare the Cambridge Clarion with the Crossway Personal Reference Bible.

I prefer the pronounced grain on the Cambridge, but it is glossier, which I don't prefer. Plus the AA is leather lined, which is nicer. I still use the Clarion quite a bit--thought something about it just doesn't quite work for me. It's not that much bigger than the PBR, though the font reads a lot bigger—for some reason the PRB just fits with my usage better. The Clarion is awesome, but it doesn't work for me as an all-around bible.

Below, you can see just how soft, pliable, and flexible the leather is. It's probably too pliable for me. The more I use it, the more it grows on me, but if I could do it again, I'd get the calfskin liner, which is a little bit stiffer. 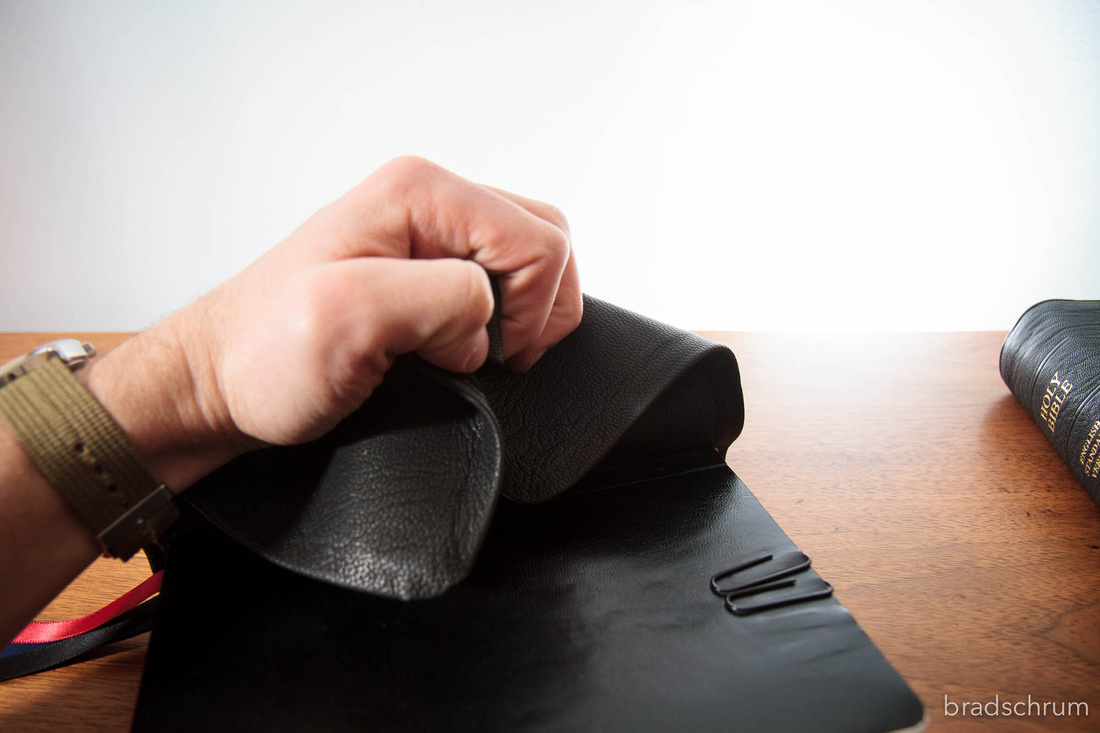 It offers almost no resistance being crumpled up. 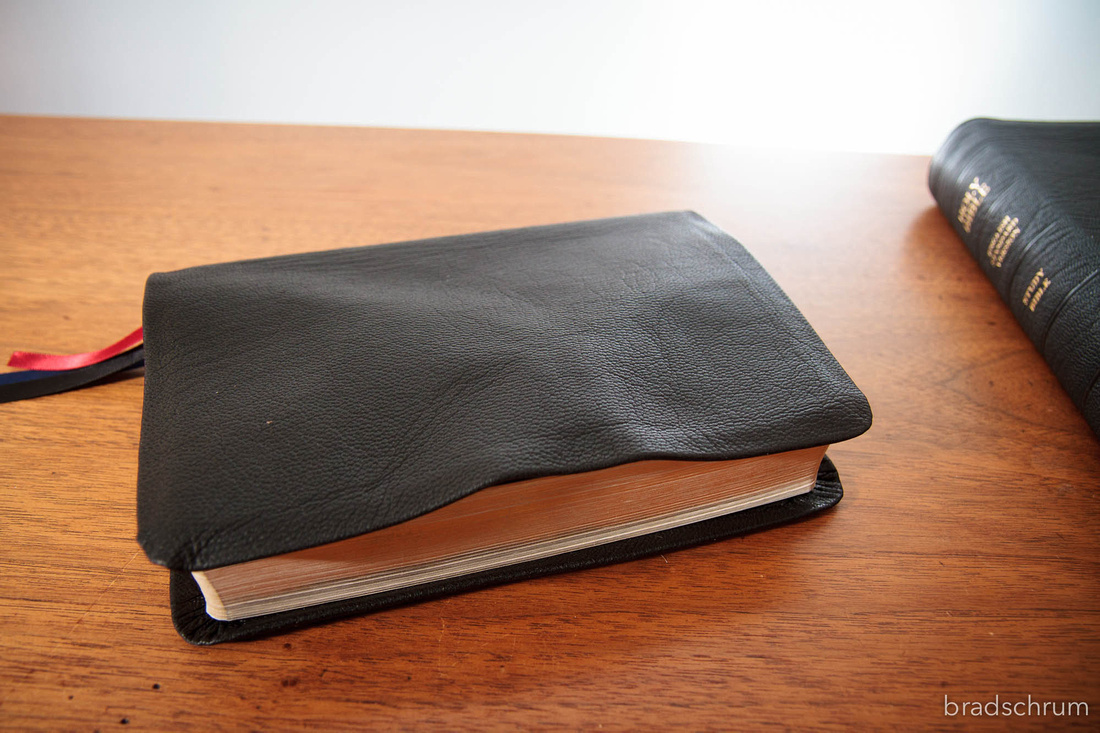 Immediately after being crumpled up. And below, you can see that after smoothing it out, it's like it was never crumpled up like a ball. 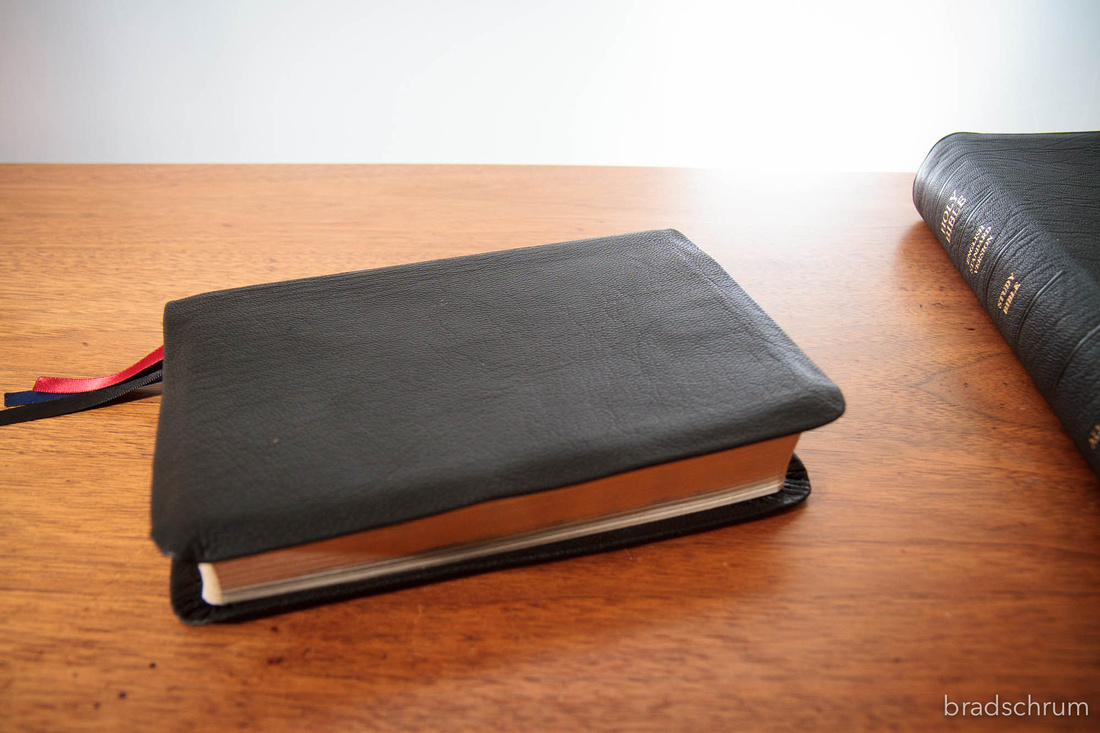 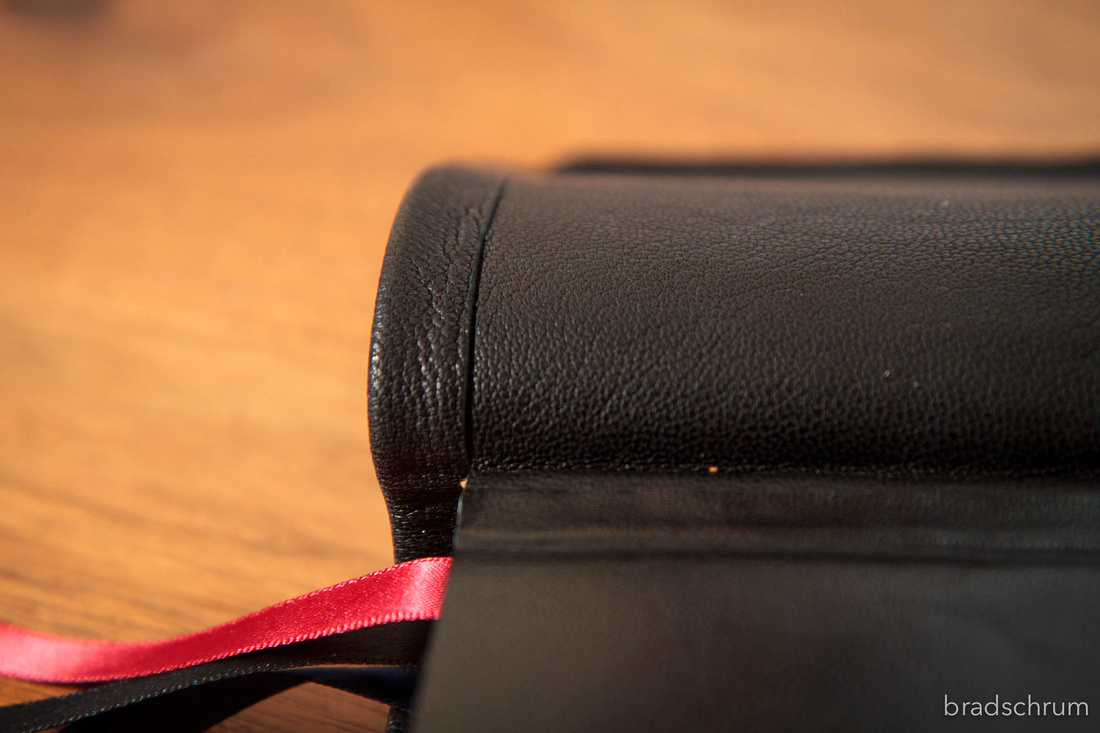 And then here's the seam where the cover meets. It's definitely noticeable. It may bother some folks but doesn't matter to me.